Rules, background, stories, general wisdom and a very nice scenario. This 128-page rulebook contains all you need to start playing. (But to be honest, although characters can be created without it we do strongly recommend the Life Board). The rules a very simple and are designed for fast role play, not slow rule play. There is also extensive background information and examples of play — all in the form of a story progressing along with the book. When you got a handle of the easy rules and have generated some interesting characters you can start playing your first scenario; The Oldest Killer, which together with a sample Character Sheet concludes this cloth-binded hardcover book.

Physical version and first printing of the Main Rulebook is out of print.

A complete character in one hour of pleasant playing. The Life Board is a new way of making player characters. With it you actually play the characters mature life. Using very simple rules, a D6 and 300 unique cards you will get a character with a well defined personality, full set of skills, maybe some weaknesses and a full history. Random events and your own will are smartly balanced, resulting in very solid and stand out characters. All made in about one hour. Creating the character is almost as fun as playing with it.

Observe that to play with the characters you need the operation: fallen reich Main Rulebook — or a just some clever imagination

A must for any O:FR Game Master. Behind this screen you will have no problem keeping your scenario content for your eyes only and play out your sessions with ease. This three sheet Game Master Screen contains an overview of all the necassary combat modifications, charts and stats for quick reference.

Folded together this will fit perfectly into your LifeBoard box.

Part 1: The Early War Years. Are you tired of players carrying 20 guns, mixing their weapons up or simply forgetting if they got a Luger or a Thompson? Then your role playing team needs Major Burt Browning's Military Weapons Cards. Part I: The Early War Years!

55 cards of different military WW2 weapons from the first years of the conflict. Classics British legends like SMLE and Webley are mixed with treacherous Nazi silenced pistols and crappy Italian machineguns.

Perfect for anyone who enjoys role playing in the WW2 setting or just have a mild touch of gun fetishism.

→ Download free sample of cards and some special freebies (PDF)

Download and start creating characters. When using the Life Board it's easy to use up a lot of Character Sheets, here you can download the dubble paged PDF for easy printing.

After the disturbing events of the missing orphans the agents are trying to relax at the Gorth family mansion. But wicked and ancient forces are set in play. Soon the agents will be thrown into a desperate fight to uncover well-hidden secrets and change the course of the future. This is the second adventure in the Ancient Anger campaign. It starts leisurely and then quickly turns darker. The agents will have to deal with an annoying future father in law, troublesome enemy agents and strange beings from beyond our reality all while their surroundings literary is falling apart.

(This scenario works best if “The 13 Orphans” has been played earlier, but not necessarily directly before it.) If you don't previously own “The 13 Orphans” you can now buy a bundle with both “Part 1: The 13 Orphans” and “Part 2: Secrets Best Kept Buried” at a reduced price.

The agents find themselves once again on the british countryside. A small community of black shirt fascists has settled down in the lovely hamlet of Dorexter and needs investigation. The agents can enjoy a garden fair, beautiful countryside and local theatre by the children of the Dorexter's Colonial Orphanage. But darker secrets and darker forces than black shirts are about to awaken in the woods surrounding the village. The 13 Orphans are the first part of the Ancient Anger campaign but can be played standalone..

NOTE: This is the 16-page hand bound version of Scenario No. 3. We have used very high quality paper and personaly bound this edition. First edition consists of 40 numbered copies. 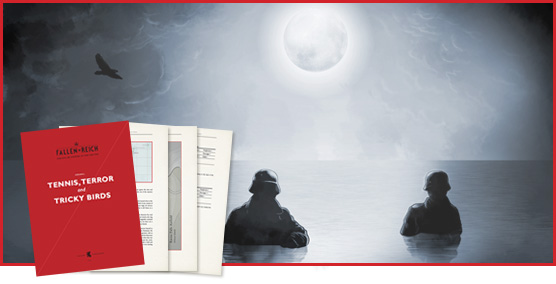 This scenario was played and celebrated at GothCon 2009 now we are very happy to be able to link to it. This is the brainchild of Gunnar Söderberg of Rollspelsbaren with layout by Niklas Rönnberg. Only in Swedish.

The official O:FR scenario for GothCon 2010 with handouts, only in swedish. Written by Gunnar Sedin Söderberg & Mikael Reidal.

The official O:FR scenario for GothCon 2011 with handouts, only in swedish. Written by Gunnar Sedin Söderberg, Johan Englund & Mikael Reidal.

The official O:FR scenario for GothCon 2012 with handouts, only in swedish. It's late autumn 1942 — our heroes need to investigate strange activities on a small island outside the Scottish coast, is it just the sheep, smugglers or something more super-natural? Written by Johan Englund & Mikael Reidal (with assistans of Gunnar Sedin Söderberg).

What do we have in store for the future? We are always planning new things for O:FR. But if you have any requests or comments please let us know (just post a comment here)

The Scenarios of Totte Alm

We are privaliged to present an extended series of scenarios written by Totte Alm. These are not official Fallen Publishing scenarios but the body of work and the level of fun gameplay is something that we feel honored to celebrate by making them more available to all O:FR fans. Totte is a creative genious with many ongoing projects, go check out his website.

All scenarios
This is a package of all the scenarios by Totte Alm listed below. (Excluding paid scenario KEEP GOING).

7.50 FROM VICTORIA
This is an scenario for 3 or 4 players. It is designed to be used as a kick off adventure and has a start suitable for both new and experienced characters. The adventure begins in London, March 9, 1939 at 7.50 pm, when the train to Southampton leaves Victoria Station.

Cricket & Crocodiles
To avoid spoiling too much for players, I will just say that it will require the players to use the brains. For 4 to 5 players.

Wicked Times
All Guns Blazing
This is a short adventure suitable for a 2–3 hour game, starting in Oxford, June 1, 1939. For 4 players.

Wicked Times
London Calling
This is a short adventure suitable for a 2–3 hour game, starting in London, July 19, 1939. For 4 players.

Wicked Times
In Vino Veritas
This is a short adventure suitable for a 2–3 hour game, starting in London, August 18, 1939. For 4 players.

Wicked Times
Bratwurst und Sauerkraut
This is a short adventure suitable for a 2–3 hour game, starting August 28, 1939. For 4 players.

Wicked Times
Winter is Coming
The adventure starts in London, November 22, 1939. For 3–4 players.

Wicked Times
Going West
This is an adventure suitable for a 4–5 hour game, starting October 9, 1939. For 3–4 players.

Lurking Dangers
A Pint Of Bitter
This is a short adventure suitable for a 2–3 hour game, starting in London, November 18, 1937. The adventure works well with new characters who just has been recruited to the O:FR. For 4 players.

Lurking Dangers
A Merry Christmas
This is a short adventure suitable for a 2–3 hour game, starting anywhere in England, December 22, 1937. For 4 players.

Lurking Dangers
Art Of War
This is a short adventure suitable for about a 2 hours game, starting in London, January 3, 1938. For 4 players.

Lurking Dangers
Where Gorillas Roar
This is a short adventure suitable for about a 3 hours game, starting in London, Friday, January 21, 1938. For 4 players.

Lurking Dangers
Heart Of The Jungle
This is a short adventure suitable for about a 2–3 hours game, starting in Tefé, Brazil, February 2,1938. For 4 players.

Lurking Dangers
An Eye For An Eye
This is s short adventure suitable for about a 2–3 hours game, starting in Tefé, Brazil, February 22, 1938. For 4 players.

KEEP GOING
This is a collection of four separate scenarios all unbound in time between 1936 and 1939. The only directions are winter or summer, which makes it very easy to incorporate these adventures into your own campaign. Read more...

Go to external site for pricing and purchase.

This is not an official O:FR product — but we support the work.