This is the in depth description of the tad more highbrow — but definitely effective — company and its colourful commander.

As the name implies the badminton club was situated on King’s Cross Road in London. Each day the staff — mostly classy women and possible agents — arrived with sport bags and rackets. Oddly enough the badminton courts were filled with games since the staff didn’t exactly have a lot to do.

The president of the Club, Sir Percy Carmichael, encouraged the independence and initiative of the different groups and personally handled many of the reports. He wasn’t specially particular with keeping notes or files of events, instead he keeped most of it in his head. The task of the staff therefore became more decorative than functional.

The lack of a proper archive would prove to have a practical advantage, since the badminton courts was hit by bombs during the war no less then three times. Some claimed that the bombers were attracted by the huge emblem of the club painted on the roof, it’s also a possibility that the true activites of the club were known to the germans. Anyway, the bombs caused very little effect and the emblem was painted back after each bombing on the orders of Sir Carmichael.

Just before the war, Sir Carmichael, was a leading diplomat. In 1914 he took the credit for being one of the responsible for starting the war — by not attending a final diplomatic meeting to save the peace. He didn’t mention the fact that he overslept, due to spending a more than exciting night with two russian mistresses. Since the war was meet with cheers he even managed to get knighted before the popularity took a severe fall with the realisation of enormous number of casualties.

After being assigned an obscure desk job he resigned in 1918 and started a business that would make him excessively wealthy. Sir Carmichael is the image of a wealthy, skirt loving playboy in the prime of his life. He’s good looking, unbelievably charming and rather inconsiderate.

The Players has a liking for sensational operations, at the same time they are the most skilled company in stealth missions. They preferably keep to the high society lifestyle, seem a tad highbrow and they prefer cunning to violence. Mostly active on the continent they have an an extensive network i larger parts of europe (with the exception of Germany) and are able to perform complex missions almost anywhere. Although, as a rule, they avoid frontline assignments.

Mission summary #1:
The Destruction of the SS Skull Rings

The raid of Castle Wewelsburg is a classic mission of the Club. This medieval castle was the spiritual headquarters of the SS, rites were performed and courses in the art of war, archeology, myths and astronomy filled the agenda. Early on the Kings Cross Badminton Club took an interest in the place, and managed to identify that in the castle was situated a small chest containing all the rings from fallen SS-soldiers.

A small hand picked team was assembled. Assassinating a group of swedish and danish nazis on their way to the castle — the group managed under false identity to infiltrate the castle and make their way to the chest. The objective was to let a priest do a blessing of the rings and then blow them up. What actually happened is unclear. Only one member of the team managed to escape and somehow make her way to sweden. Unfortunately she had aged 50 years and died of heart failure shortly after her arrival. She is said to have rambled on about destroyed rings before she past on at a hospital in the city of Malmö. Sir Carmichael took this as a sign of success and the club celebrated with champagne and canapés.

Antonio Verdici was one of Europe’s most reliable psychics with a special flair for predicting death and illness of prominent persons. He also had a severe gambling obsession and toured the casinos of Europe spending all the Deutsch Mark the Nazis gave him. Unfortunately his gifts were of very little use at the roulette table, except for one time when he predicted the death of the croupier, made an astronomical bet on number 36 and put the ball on the right number when everybody was helping the dying man.

The Players first plan was obviously to kill him, but after two disastrous attempts the Players realized that it will never work. Instead an advanced kidnapping plan was set in motion. With the help of a hypnotizing roulette wheel and a bribed casino manager in Monte Carlo they managed kidnap not only him but also one of Mussolini’s cousin and German general. After being relieved of his gag, Verdici claimed to be predicting the death of all the members of the team, himself, the cousin and the General. By now however the team had realized that his prediction could be altered and they swiftly changed plan. Instead of crossing the border to Switzerland they only sent a decoy car. It was shot to pieces before getting even close to the border station.

Instead the team got hold of a pilot who could fly them out, but on the airfield they ran into a Hussarian rescue team, in the ensuring fight all was gunned down except for Verdici and Moussolin’s cousin who both ran to and boarded the aircraft and took off by themself. Verdici had heard about Havana’s gambling dens from one of the agents and was filed with an unbending desire to visit them. However, after the hypnotizing roulette wheel his psychic abilities was no more. He was believed to have been killed when his ship was torpedoed on the way to Cuba.

Mission summary #3:
The Burning of the Library of Castilé

This is by most people seen as an act of extreme vandalism as the library contained many unique and historically invaluable volumes including “Abyssus Abyssum Invocat” and early manuscripts of “Dialogue Concerning the Two Chief World Systems”. Hidden amongst the thousands of other books were also several potent scripts on occult and terrible matters. Not even the methodical Germans had managed to find a scheme on how to uncover them and a small staff of historians worked there since the occupation. A team of Player agents posing as a German film crew managed to get into the castle, following ancient scripts found previously in Marseille they got their hands on two dangerous documents and had leads on several more. They were however interrupted by Gestapo, after a brutal fight most of the team was killed but two survivors manages to set the library on fire and get the French to blame Gestapo. A bad day for both Nazis and historians all over Europe, but a very glorious day indeed for the two surviving agents and the Players in general.

This is were a gentleman or a lady gets training in the noble art of espionage.
Skills: German, Shadowing, Stealth, Photography, Observation, Searching, Interrogation, Lock Pick, Acting/Disguise.
Mandatory: Clubs and Etiquette. 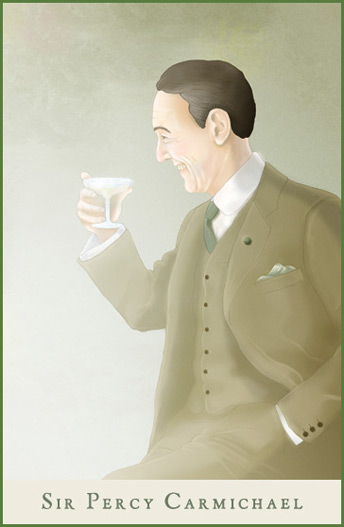